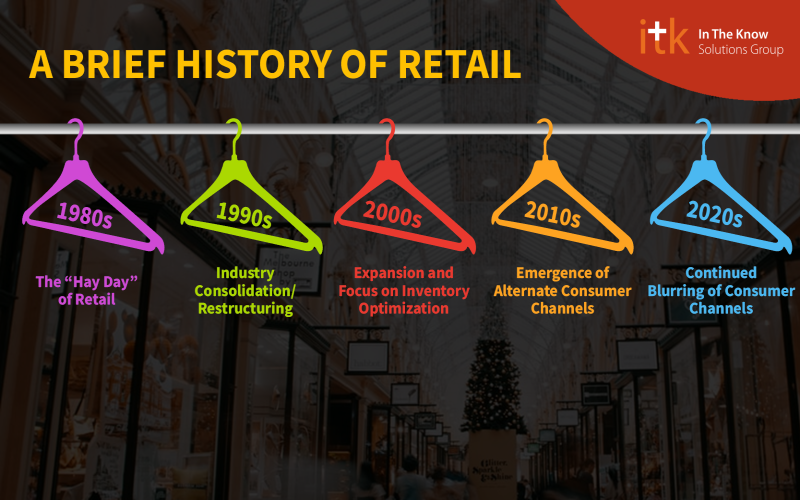 We’ve all heard some form of Charles Darwin’s famous axiom “It’s not the strongest of the species that survives, nor the most intelligent, but the ones most responsive to change.” This was Darwin’s attempt to explain how millions of years of evolution has resulted in the world we live in. At its heart this explains exactly how life on earth changes over time. It is a particularly apt metaphor for how the retail and wholesale industries have evolved over time.

From the humble beginnings of a common marketplace inside the walls of medieval cities, local farmers came to “Trade” the products that they produced (milk, vegetables, bread, meat, textiles) with the other local farmers. Industry historians call these medieval marketplaces “the first mall”.

Fast forward to modern times and, focusing only on the past several decades, we can easily track how the industry has evolved:

The 1990s: Industry Consolidation and Restructuring

The 2000s: Expansion and Hyper-Focus on Inventory Optimization

The 2020s: Confluence of Consumer Channels

Change in Technology in Retailing:
Technology alone cannot accelerate change faster than an organization is ready to absorb it. Retailers and Wholesalers have habitually been reticent to spend money on technology. The IT budget has always been the line item where retailers and wholesalers looked to make cuts to save money, rather than recognizing IT as a strategic differentiator. As online entrepreneurs entered the business, they had a clean sheet from a technology perspective. They were unencumbered by decades of legacy decision making. These “digital-native” retailers either bought purpose-built solutions to operate their online selling platforms or built them from scratch. Today, store-native retailing is behind the technology curve due to the cumulative impact of short- sighted technology investment decision-making. This lag has put them perpetually behind in technology and operational innovation of digital-native retailers.

Legacy retailers and wholesalers are now faced with the prospect of catching up, just to be competitive. The past few years have seen companies selling directly to consumers searching for a quick fix that will make up for years’ worth of stagnant thinking.

The challenge to compete starts with the basics. The creation and maintenance of the Golden Customer Record is foundational. Without the ability to establish a clinical identity of the consumer, it will be impossible to provide a consistent experience and build loyalty across all channels.

In the most glaring example, most store native retailers have consumer data scattered across their POS system, their loyalty program, and their web platforms. Few retailers actually consolidate this data into a single functional database, and fewer yet go thought the exercise of routinely cleansing the data to ensure they have a single view of their consumer. This foundational lapse aptly illustrates the timeless wisdom of Darwin’s theory.

For those of you struggling to contend with the rapidly evolving retail landscape, we’ve written a new whitepaper just for you: The New Retail Reality: 5 Keys to Survival Every Retailer Needs to Know

Interested in a demo? Want to learn more about our services?
Send us a contact request, call us, or check out our locations—your choice.

Stay In The Know

Thank you for subscribing!